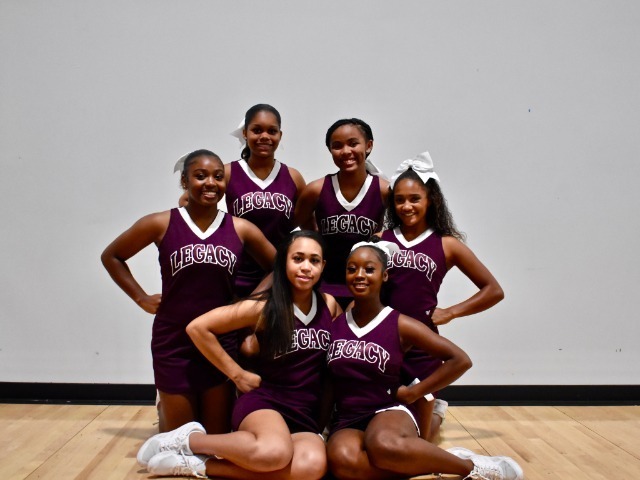 Our Legacy cheer team attended the National Cheer Association Summer Camp Top Team Competition in July. This was their first appearance at a camp. Our cheer team won the NCA Top Team Cheer 21, meaning they scored the highest in the varsity cheer division. Two of our cheerleaders, Jada Davis and Daisha Cannon, won the NCA All-American award, which provides them with the opportunity to travel overseas to perform with the All-American team. With more than 10 awards/recognitions Legacy’s cheer team is clearly in it to win it, ready for success, and is just getting started.
This is senior Allaya Livingston’s first year at Legacy and first year cheerleading. What stood out to her was the high competition and fast pace of the NCA camp. “You had to get all your stuff right because there is always a crowd watching you. You had to make sure you kept up,” she said. During the summer, she received the “NCA Pin it Forward” from the NCA staff, a recognition that only six cheerleaders at the camp can be given. More amazing than the awards from the camp was understanding what each of the awards means for the cheer season. “The best part of being a cheerleader is honestly the teamwork aspect of it. I really like how we always come together,” Livingston said. “And if somebody doesn't make it to practice, we literally can't do a stunt without one person…. how we get along impacts the school just because it shows that teamwork is everything.”
Legacy’s cheer coach, Sierra Quiroga, was asked about the success of the cheer team at the camp and her role this year as the cheer coach. “You can ask any of my cheerleaders, I am a tough coach. But I'm tough because I know what it takes to make it to the next level. And that's why I tell them whatever your next level in life is, I'm going to help you get there.” When asked about the characteristics of the team that are important, Coach Q noted, “Definitely we stress on and off the mat to be a Titan; to ‘Titan up.’ We preach the Legacy way. So be where we are supposed to be; do what we are supposed to do in the pursuit of academic and athletic excellence. My girls showcase that day in and day out.”
Varsity Cheer Captain and senior, Asia Roy, has been cheering for thirteen years. She is a two-time All-American Nominee. Her responsibility as captain is making sure the team is ready at all times. “I’m checking to make sure everybody knows what uniform we are wearing, what cheers we are going to perform next, making sure we have all the equipment we need to be successful, and I’m helping with the routines and perfecting them,” she said. “It’s a lot with being the cheer captain but I wouldn’t trade it for the world.” Roy plans on continuing her cheerleading journey at Clark Atlanta University in Georgia.
Coach Q said her mentality is. “Do or do not; there is no try.” This saying has reoccurred throughout her life and it is something she emphasizes every practice. “A well rounded athlete needs to have character, attitude, and self awareness. Those are things that make a good athlete. Anybody can dribble a ball, anybody can throw a back handspring. Anybody can do a stunt. But what's gonna set you apart from those people and it's those three things….We're not going to halfway do something. [We’re] really going to do it, or we're not going to do it at all. So always go big or go home, always do it or don't but just don't be stuck in that middle of that gray area. Just go for it. 100%.”
Apart from the amazing successes and the challenges conquered by this team and it’s individuals, we cannot wait to see the impact they will have on Legacy’s spirit and school pride. When asked about being on the cheer team, junior Daisha Cannon noted, “The best part about being a cheerleader is being able to uplift and engage with the crowd.” Uplifting the crowd is just what the cheer team will be doing this school year, so make plans to come and see them perform.